Beach Cottage Renovations {In the Beginning . . .}

One hundred and eleven years ago, a fine little house was built.

Some sixty years later it was remodeled . . .

and clad in wood paneling (which of course, was the style at the time) . . . 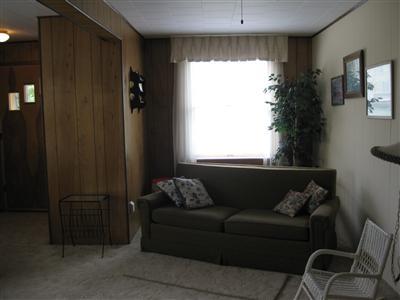 So I set out to breathe some light back into the fine little house.  To wake it from a long slumber . . .

Mission accomplished.
(or actually very much in progress . . . let’s take a second look)

So far seven galloons of white primer and paint have been used to turn all of that wood paneling into beachy white wainscotting.  You can see the detail better in the photo below.

I’ve paired it with soft blue paint on the trimwork (Martha Stewart’s “Love in a Mist”), to draw in the summer sky through the open windows.
This is a built-in book shelf that looks so pretty now that it is white-washed!

There is still so much to do.
We are just getting started.
But the surface has been scratched, er painted, and we have come a long way in 3 short weeks.
﻿Thank you so much for being kind and patient with me as I have worked to get enough accomplished (and photographed) to merit a blog post!  I really wanted to have big, bright beautiful pictures to show the first “after” pictures but I quickly learned that the 50mm lens I have for my camera will not take pictures of small cottage-sized rooms-no way, no how.  I borrowed my parent’s point and shoot so that I could post this update-as you can see a lot of the detail in the wainscoting, etc. is lost in the larger pictures.  I am working on getting my hands on a wide angle lens . . .
So far we have been addressing the living room and master bedroom.  The “first look” photos above are all the living room.  Bedroom pictures will soon follow.  I am limiting my focus to one or two rooms at a time so that I don’t get overwhelmed.  The next big thing will be uncovering the hardwood floors in both the living and bedrooms-flooring guy is coming early next week (yes!!!!)  Once the bedroom and living room are finished, I will be moving on to the kitchen!
So glad you are along for the ride!  It wouldn’t be half as much fun without you, friend!
More soon . . .